[NT] Do you answer your phone?

Do you answer your phone?

A lot of the time it rings and I don't hear it because I'm busy, away from the phone, playing music, I'm at work or school, etc.; and then I forget to call people back. But if I'm there and hear it ringing, and it's not my mother, I answer it because I like my rare moments of social interaction. That said I don't really like talking on the phone for long periods of time. I prefer face to face interaction. Holding the phone and trying to do things is awkward, and then there's that awkward time of wanting to hang up and not knowing if it's the right time. I particularly don't like talking to my mother on the phone because 1) she's loud and boring, 2) she asks me a bunch of silly questions I don't want to think about like what someone else is doing, 3) she's constantly giving me pushy unsolicited advice, 4) if something is going on she'll call me like 5 times in a day, and 5) she usually calls at inopportune moments such as I'm carrying something and about to unlock the front door, driving, in class, about to take a shower, thinking intensely about something, you get the idea.

And what type are you?
That's the question, isn't it? I think I'm INTP, but there are a lot of people who seem to think I'm an F. So INXP/INTX.
D

YWIR said:
I try not to. I only pick up when I've been waiting for a specific call, otherwise, when it comes to phones/msgs I'm avoidant as fuck. Unless theyre serious of course.


My reasoning is generally not havin the patience to listen to meaningless rambling. Sometimes anxiety over expecting the worst that can not be controlled.
Click to expand...

I ignore perhaps 80% of calls...But I tend to be very honest with people when giving out my # that when you call, probably I wont pick up... unless its veryyy urgent!!

This way, I wont feel guilty about ignoring calls...

Haight said:
Can you elaborate?

I'm interested to find out if the people that feel anxious when the phone rings actually know why they feel that way.
Click to expand...


I actually got that from a conversation I had a few days ago. An etype 2 was having problems with presenting herself professionally when she entered a room (looking confident, introducing herself ect.), and someone else suggested that she use ordering a pizza over the phone as practice, trying to sound professional while arranging a tracsaction with somebody you don't know.

from there the conversation turned into how nobody answers their phone.

(funny enough we actually did prder pizza that night, but we did it online since nobody wanted to call XP)

Only if it meets these conditions:
1. I hear it
2. I know who it is or expecting a call from some company
3. I want to talk to the person

If it fails any of those 3; I don't answer. My type is INTP.

Not usually. But I'm flaky as hell.

Rarely. I hate talking on the phone if I can help it. I greatly prefer text messages for communication if face-to-face communication is not an option.


Don't like talking to people on the phone. Except my mom, and sometimes my husband.

I really don't like standing up when comfortable. If it is comfortably located.

Understood. But do you know why you feel that way?

Get the Voxer App- the best of both worlds for those who don't like a phone call but don't want to type it out.

I hope this image hasn't been already posted, as I only skimmed through the thread. 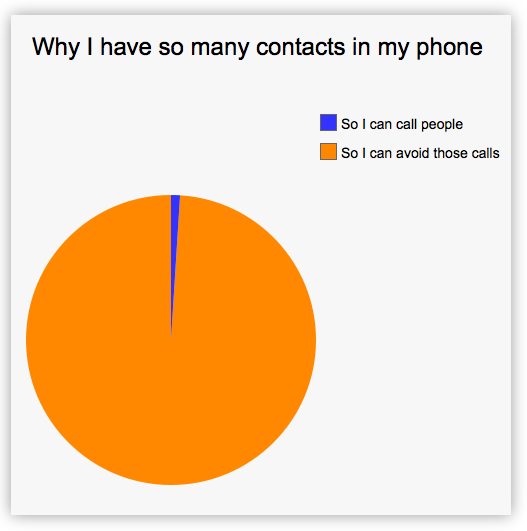 Truth is, I don't have many contacts, but such an attitude does make perfect sense to me. As an INTJ, I rarely answer the phone because I don't see how it could bring me something of any interest. Also, if someone makes a remark similar to "You didn't answer the phone..." expecting some sort of explanation, I assume, I always give them a very short and positive reply: yeah.

rarely unless its coming from someone at some specific time that might make it seem important...or...from someone that i asked to call me.

i hate the phone tho....most of the time
except for the rare 2 hour phone conversation with my mother or an old friend

The phone is the bane of my existence. I always wait for the message to go to voicemail first to decide if I want to call back. Exceptions would be family members and other people I'm expecting a call from, which is rare anyway.

Phone calls are an unwanted interruption for me.

As an introvert, I like to think about what I want to say first and phones are more talking on your feet than say texting or email.

Many of the phone calls are junk calls and just not worth my time.

If the call truly is important, I trust that a message will be left in my voice mail.

Never answer the phone and it drives people mad! I hate the hearing the ringer, so the ringers are off. I have voice mail connected to alert me of an emergency.
E

htb said:
If my service's caller ID shows a number that isn't likely to be a solicitor's, I pick up the phone.
Click to expand...

I think the person who had a trouble and want a advice and immediately get the solicitor phone than i thinks it will be helpful for them.But now a days there are many people that just call for selling their services so that's why most of the people don't attend that calls.

Such Irony said:
The phone is the bane of my existence. I always wait for the message to go to voicemail first to decide if I want to call back. Exceptions would be family members and other people I'm expecting a call from, which is rare anyway.

Phone calls are an unwanted interruption for me.

As an introvert, I like to think about what I want to say first and phones are more talking on your feet than say texting or email.

Many of the phone calls are junk calls and just not worth my time.

If the call truly is important, I trust that a message will be left in my voice mail.
Click to expand...

I agree with everything here. I prefer to communicate by email, and save the phone for emergencies, or when I really need an immediate response. With a minimum of advance planning, I rarely do.

People know to email me before they call and ask if I want to talk. Otherwise, I don't pick up. Not just that I don't pick up at that moment -- I may not pick the phone up even to check messages for days. I hate the phone, mostly. I do have one friend I talk to on the phone, sometimes for hours, but we just hang out together. There are long silences as well as lively conversations. If someone can just hang like that, I am fine, but if they want chitty-chatty, I can't do it and don't want to.
W

I never answer until I've listened to the voicemail and decided its something I want to deal with. Failure to leave a voicemail means I will never call you back. Curiosity doesnt get the best of me, ever. Do this even if its someone I know or a call I'm expecting. I never like to be surprised or forced to make decisions on the spot without the full possession of whatever facts I am able to get my hands on.

Contacting me requires either a voicemail or a txt stating your purpose and some hint of what you are wanting from me. I will then research and call back when I am ready to respond.

99.9% of the time, I do not answer my phone (unless it's my doctors, or my crazy mother who will just call incessantly til I do pick up- or, if it's a friend who has given me advance notice that they're gonna call/need to talk/have asked if I'm free to do so 1st, via text/email).
Overall, though, I'm like an elderly person- I screen my calls.


At this point, calling me unexpectedly is almost the same as showing up unexpectedly at my doorstep. However, if you showed up at my house (non-emergency/crisis scenario) I'd be pissed (kick my Fe diplomacy into the kitchen to fix me a drink) and tell you point-blank to fucking leave (anyone who knows where I live is aware of my "No Surprise Visits" rule). If someone calls, I'm not mad/don't feel quite as invaded.. I'm a bit.. uneasy, though. I just wait for a text or a voicemail to follow afterward. If it's important enough to call, they'll leave some kind of message.

I've been wracked with some health issues the past couple.. years.. and it's really depleted me of energy, in terms of social interaction. So, I prefer to know what the hell I'm getting into when I do engage in conversation. Much as I love my friends, sometimes I literally don't have the energy to just chat. Or to console/dissect problems, or be a sounding board for ideas (and obviously trying to avoid the "catch-up convos of "so what have you been up to?" - "oh, just being half-dead/sick" - buzzkill topic that inevitably comes up). I care but at the same time.. eh. I need a rest. Trying to explain [parts of] that to people sometimes offends them or needlessly makes them feel guilty, so I tend to just fall off the planet & leave it unknown, to a degree. A little while later, I might toss a text to them asking what going on, hoping they're well, apologizing for missing the call. And, it is sincere. I do want to make sure they're okay. And.. I am sorry I can't talk to them. I just don't go into why I can't, most of the time. They don't really always need to know. /shrug

If I don't recognize the number, and they don't leave a message, I never answer. Fuck you, Mystery Caller. If it's that important, and you really matter, you already know that I screen calls.

You must log in or register to reply here.

T
[ISFJ] Do you think I'm a normal ISFJ?

I would really appreciate your typing about me

I would really appreciate your typing about me
4 5 6

Questionaire and Request for Typing!

Y
Do you ever happen to be someone else in your dreams?