The mayors of Madrid, Vienna and Berlin all received seperate video phone calls from a deep fake pretending to be the mayor of Kijiv. The calls had been prearranged and the voice and face really seemed those of Vitali Klitchko. However both Berlin and Madrid (Vienna apparently was fooled) soon smelled something fishy and eventually broke off the call and confirmed with the Ukranian embassy that the calls were indeed fake.

It was the content of the conversations that made them suspicious. In the case of the call to Berlin the fake caller asked about Ukranians abusing the German welfare system. Then he asked if Germany could please send male refugees back to Ukraine to fight (at which point the Germans hang up).


EDIT: It gets even weirder. Apparently the fake Klitchko had asked if it was okay for the concersation in Russian and run via a translator. That should have been a red flag to begin with since Russian is Klichko's mother tongue but he is fluent in German and English (he has spent much of his life in Germany).
Last edited: Jun 25, 2022

Yeah, I see that one popping around the internet.

However there will evidently be some kind of refugees in this story. Some people will surely move away from very red areas, that is simply a reality. Plus I saw the story that some female troops don't want to serve in such areas any more. As I said this has much more complex cultural and economic consequences than it seems. Especially because this has even geopolitical consequences, since it creates another "border" between US and most of it's allies.


Some thoughts on all of this.

Beau of the Fifth Column
1 hour ago

Red Herring said:
Sadly there are many who even in 2022 think "democracy" is just another word for "majority decision" rather than "selfadministration of the people with several mechanisms, one of which is decision taking by majority, that requires certain civil preconditions". It worries me.
Click to expand...

I think that the main mistake (or confusion) has three aspects to it:

1) The first aspect is terminological and consists in collapsing the distinction between democracy pure and simple or democracy without qualifications and liberal democracy, which is a more accurate term, along with constitutionally limited democracy, for the kind of political systems such as those of the United States and Germany). I say this is a mistake because by not distinguishing clearly and constantly between different "kinds" of democracy what happens is that a lot (REALLY a lot) of conceptual slippage takes place: when someone is talking about democracy one cannot be sure what they are talking about. For example, the famous Democracy Index published by The Economist really should be the Liberal Democracy Index (because that's what it measures) and when one talks about "democratic backsliding" one should really say "liberal-democratic backsliding".

2) The second aspect is more analytical, but is not unrelated to the first. It has to do with the institutional fact that liberal democracy necessarily is a complex thing. A liberal democratic political system has different compontents, some democratic (strictly speaking) and other (liberal) components (not necessarily all of them) that are not democratic such as independent and professionalized (e.g. in civil law jurisdictions the judges are specifically trained to be judges and spend their entire careers as judges) judiciaries, rule of law, constitutionalism, division of authority, indirect elections, legally protected rights (human rights as interpreted to be compatible with liberal democracy together with the more traditional liberal rights such as property, contract and tort rights), and even independent, professionalized, and legally limited bureaucracies (again the German example here is important to take into account). This means that the outcomes that liberal democracies produce are a result of the interaction between their different components and their interaction with forces in the wider society, that how these components are put together (for example in a written constitution) matters for the outcomes that a liberal democratic political system will produce, that one cannot strictly attributed the real good things that have come from having liberal democratic political systems to their actually democratic (this is why concept slippage is dangerous) components.

3) The third aspect has to do with the effects that terminological ambiguity (the first aspect) and analytical poverty (the second aspect) have when the different components of a complex, liberal-democratic political systems, so to speak stop working harmoniously. It is always a possibility that a liberal democratic government, under one set of larger social conditions, will function harmoniously (produce what liberal democracies are supposed to be designed to produce) and, under another set of social conditions (even in one same society that has undergone or is undergoing changes that are largely or somewhat independent of the political system itself), will stop producing the outcomes it is designed to produce (its functioning stops being harmonious). Just as the good results of a liberal democracy can only be attributed to the interaction of the system as a whole, so the bad outcomes have to be attributed to the same interaction. But when one confuses democracy pure and simple and the complex thing that is liberal democracy (terminological and analytical mistakes), one is at risk of not beign able to tell why is it that the political system is becoming unhinged and is also at risk of either doubling down on the problems (and making things even worse or killing the whole system, or parts of it, like judicial independence for example, entirely) or end up rejecting the whole thing (liberal democracy and even democracy pure and simple) in favor of some authoritarian supposed "solution" (BTW, authoritarianism almost always, if not always, makes everything worse without solving the problems it is purported to solve).

And what's worse, realistic and possible institutional solutions (such as they are) that could preserve both liberalism and democracy can get dismissed out of hand as "anti-democratic" or "anti-liberal" when in reality what one wants is to reform the system so that the whole thing can be made to work under different circumstances (circumstances, unforeseen or foreseen, under which it was not designed to work).

This is an interesting paragraph from a relatively unknown book, The Case Against the Democratic State: An Essay in Cultural Criticism (Gordon Graham, 2002):

Geolibertarian democracy is the only viable democracy.
D

I hate to say it, but sex strikes will do nothing except make your own relationships bastions of resent and mutual loathing. Meanwhile, the people you'd most seek to affect with this are applauding you for removing yourselves from the reproductive pool. But kudos for having something meaningful to post on your dating profile for once.

Ron Swanson is a satirical character.

Apparently The "Supreme" just means you get sour cream and tomatoes, and it costs slightly more than a regular court to buy it.

This is satire, right? 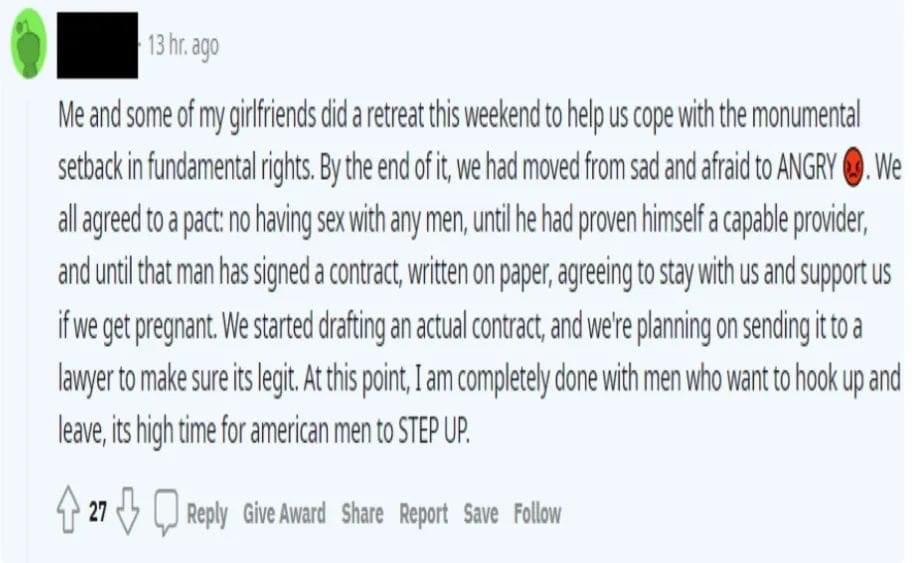 As I said, this is perfectly logical and expected outcome of "the big decision". The only real question is what happens when men realize where this is all going.

I mean, you know how many times I’ve been told “don’t want a baby, don’t spread your legs?”

Abstinence until menopause. My husband will love that.

(so would any man in a LTR)

I don’t know that sex strikes will work, but yes this has repercussions for men as well.

Virtual ghost said:
As I said, this is perfectly logical and expected outcome of "the big decision". The only real question is what happens when men realize where this is all going.
Click to expand...

Lysistrata on the lighter side.
But mostly I think its just going to divide the vox populi instead of bringing them together which is where they need to be to combat what the SCOTUS seems to actually be up to which seems to be Coup Part Deux: The effective part.

I guess you can call this a sign of solidarity.

I wish we lived in a thriving matriarchy instead of a dying patriarchy.
These weak mad "men" are dangerous fools ruled by their insecurities and fears; they will not hesitate to be monsters, because they think they speak for the gods.

Beware of false prophets, who come to you in sheep's clothing but inwardly are ravenous wolves. You will recognize them by their fruits. Are grapes gathered from thornbushes, or figs from thistles? So, every healthy tree bears good fruit, but the diseased tree bears bad fruit. A healthy tree cannot bear bad fruit, nor can a diseased tree bear good fruit. Every tree that does not bear good fruit is cut down and thrown into the fire. Thus you will recognize them by their fruits.
“Not everyone who says to me, ‘Lord, Lord,’ will enter the kingdom of heaven, but the one who does the will of my Father who is in heaven. On that day many will say to me, ‘Lord, Lord, did we not prophesy in your name, and cast out demons in your name, and do many mighty works in your name?’ And then will I declare to them, ‘I never knew you; depart from me, you workers of lawlessness.’

Their own claimed scriptures condemn them. Blind prophets, charlatans, wolves trying to herd sheep. Damned by their own log eyed prejudice...

This is why it should be separate.... American Taliban. If this was happening in a more...tan country these same chuckle heads would be demanding the government war hawk them. Find weapons of mass destruction, send missionaries ffs.

The hour grows late, smoke rises from the mountain of doom, and Gandalf the Grey rides to Isengard to seek council...this like that, is also a trap. What fools these mortals be.

The Law of Severn is a real working concept found in the enneagram model is it nested in the Heart of The Universe?