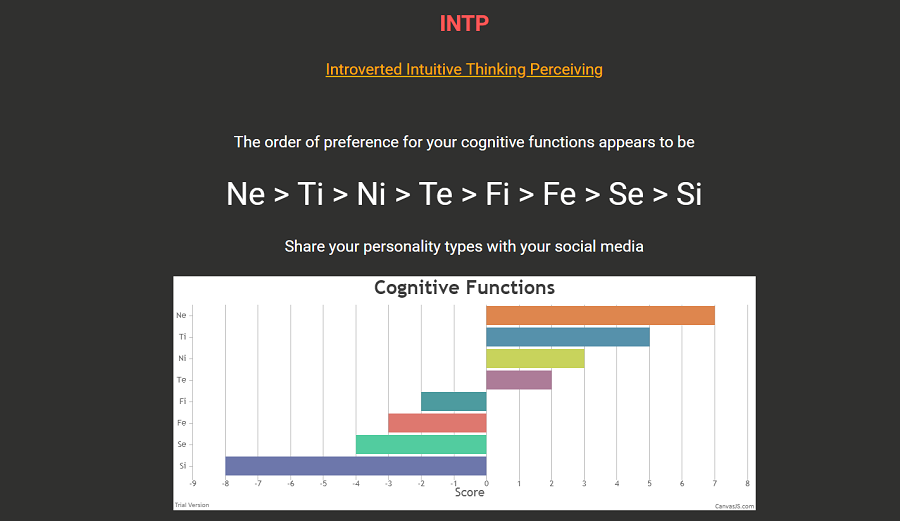 Hi everyone, I'm new here so I took the test 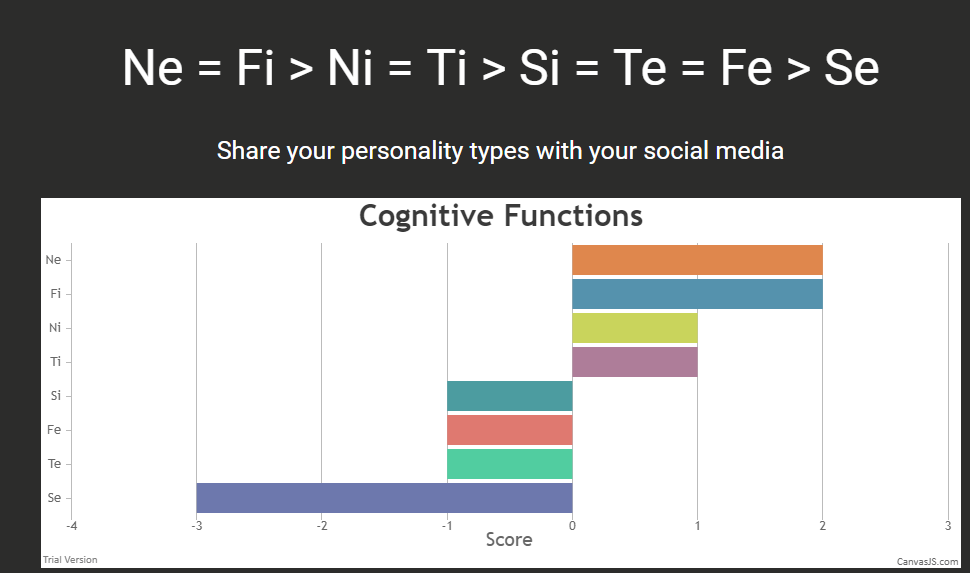 I'm still not sure about E vs I.

Yep, got INTP, but was pleasantly surprised that it positioned Ne first and Ti second. I did self-analyze and noticed I tend to first use Ne and then use Ti heavily on the intel I gathered via the first, but I know I am not an ENTP. So, this is the only test that got me right by the functions.

Turi said:
I retook the test, to test for two things: consistency within the test, and to test my own subjective bias as I believe myself to *actually* prefer Sensation over Intuition.

There are multiple consistencies - the first is that I am an 'introvert' according to your test, the above suggests ISTJ and last time, it was INTJ.
The next is Te 'dominance' both times, with Ti actually falling into precisely the same place as well.
Fe falls into last place both times - this doesn't actually make sense from a Jungian perspective whereby Fi should be there - or, alternatively, Ti should be 'first' - although, it does make sense from a 'realistic' perspective as yes, Fe isn't exactly a 'strong point' for me.

Si and Ni are switched around, but the idea of Te-Pi is consistent both times.
Slight discrepancy whereby Ne is a little higher, and Fi and Se are the same this time, whereas last time it went Fi-Se-Ne.

Still, overall, my results are, IMO, consistent, same general introverted disposition, same notion that I am an 'introverted' Te type, same least-preferred function-attitude in Fe, Ti is in the same position, and my Thinking is supported by an introverted perceiving function as opposed to an extraverted one.

IMO, it's consistent, appears to remain relatively consistent despite subjective bias on my behalf (which may influence the order of S/N this time) though I still have the same issues listed last time - as well as one more I didn't mention, and that is separating I from E - the first half of the quiz is dedicated to this entirely - and it's not true to Jung as it doesn't follow his theories on the general attitude of consciousness (functions can't be separated from attitude, and so it doesn't make sense to test for attitude, isolated from functions).

That said, I actually like the test, and don't believe this aspect of Jungs theories should be adhered to strictly, due to it forcing IIEE/EEII stacks, which not everyone actually seems to follow - so I do like that this test is "open" to not forcing people into specific "stacks", if that makes sense.
Click to expand...

I feel like something is up with the dates, how has it been over a year since I wrote the above post? Anyway.

I took the test *again* for no real reason other than I'm bored and I think it's cool to see if any pattern emerges, this time I got "INTJ" again, but the functions are in a different order:
Ni>Ne>Te=Ti>Fi>Si=Se>Fe (link)

Some inconsistencies with the function stack for sure, interesting that it still gives me the same INTJ type though, this is actually the third time in a row it's given me INTJ and each time has been spaced out by quite some time.
I'd love to suggest these results reflect some kind of intuitive bias on my part and that I'm actually more S than that but the sad reality is, the reverse of this was most likely the case last time as I kind of alluded to.

I find it very interesting that it has repeatedly typed me as INTJ by dichotomy but each time I've had Fe as my least preferred function (Se-Fe to be precise).

And then there's this:

Off to new adventures

Another year, another try. I do feel more stable and better able to see what exactly I'm about now, as compared to then. The test says INFP, but...

the stack is very clearly that of an ISFP that needs to Se more. Sounds about right. 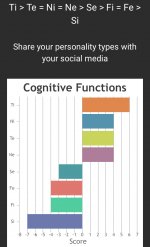 Bit weird function strengths(or is it just possibilities that it got them right?) but it got the type right. I knew that some answers would take the test result to wrong direction, but apparently there werent too many of those questions
M

I got equal on Ti and Te so I guess it's between ISTP and ESTJ (Se/Si were also high and Ne/Ni were low). That's about right.

Took again, thought I might get something different this time.

All I can conclude with certainty is that my Se is piss poor.

I don't understand how this results in ISFP. 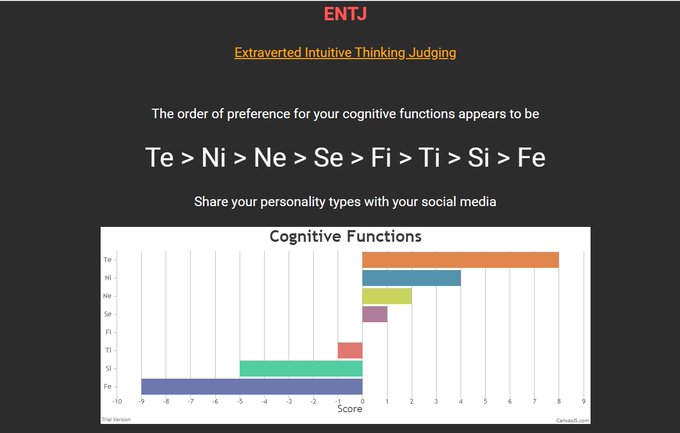 Luminous said:
I don't understand how this results in ISFP.

Higher preference expressed for sensing (overall) vs. intuition. Tally up Si+Se vs. Ni+Ne

Some questions were hard to answer. As I felt as if none of them were most/least like me. So errr, not sure how representative this one is. Though it's a test... Are tests ever representative? Do I even, represent myself? *brain explodes*

That makes a certain amount of sense, though I wonder why the results aren't based on which scores were positive? (For me, Fi, Ne, and Si...) as the negative scores were the functions least like what I normally use. I guess it's trying to balance functions with dichotomy?

Luminous said:
That makes a certain amount of sense, though I wonder why the results aren't based on which scores were positive? (For me, Fi, Ne, and Si...) as the negative scores were the functions least like what I normally use. I guess it's trying to balance functions with dichotomy?
Click to expand...

It uses a combination of dichotomies and functions to come up with type. What I found is the previous version that relied more heavily on functions and their order ended up being less accurate.

ESFP Se>Fi>Si>Fe>Te>Ni=Ne>Ti
You must log in or register to reply here.