FMWarner said:
And I don't know about out the yin yang, but Patrick Roy (sadly missed) and Ray Emery sort of have the same mojo.
Click to expand...

I kinda agree but I think Roy and Emery have more control of their emotions. Hextall would take some bad chops on opps legs and cost his team more than than firing them up.

Hextall was kinda fortunate to play, wasn't he? Wasn't he down in the minors when Pelle Lindbergh died? I was thinking the #2 goalie got hurt and that's how Hextall finally got in but otherwise he was barely trade bait as a prospect back when he started, though winning R.O.Y. I can't really remember.

Looks like I'm gonna get to go to San Jose vs. Vancouver when I go home to the bay area in Dec. It'll be my first time at an NHL game. =D

Oh how exciting for you! I'm sure you'll enjoy it!

Be sure to get decent seats -- bad seats ruin the fun. No "nose-bleeds"!! And take ear plugs just in case. Gets pretty loud.

PinkPiranha said:
Oh how exciting for you! I'm sure you'll enjoy it!

Be sure to get decent seats -- bad seats ruin the fun. No "nose-bleeds"!! And take ear plugs just in case. Gets pretty loud.
Click to expand...

I will do my best to get some decent seats. I don't think ear plugs will be necessary. I'm a drummer.

Well, I went to my first game of the season. Avalanche visiting the kings. I have to thank the Good Ticket Fairy at work for setting me up right on the redline, six rows up from the ice. Five, if you count the announcer. One thing that amazed me were the number of people taking pictures of guys sitting in the penalty box. We're talking fourth line guys you think were walking the red carpet the way the flashes were going off.

This was my first chance seeing the new style sweaters. Definitely a Robocop/Stormtrooper look. May take some getting used to.

Price of a large, premium beer $10.50. Large soda in souvenir cup $5. No not going to do a MC commercial, just wondering how it compares to other arenas?

Biggest disappoint, well besides thinking it was going to be a first date w/someone but ended up going w/a buddy (which was cool, dgmw), was that my favorite player of all time, Joe Sakic did not play. Apparently hurt in last night's game against the Sharks. Speaking of which, a little weird seeing Scott Hannum in a Avs jersey.

I think both teams played the previous night, which can often trip the warning light to a possible snoozer of a game. Not so. Energy was up the whole time. Holy crap are the kings a team w/out an identity. They scored the first two on a couple of pretty good plays but man they suck. They were reasonably healthy. I thought they had some young players set to break out but by midway through the first, the ice started to be tipped in Colorado's direction. Kinda surprising since it was basically the Erie Bears or whatever their minor league team is, out on the ice.

One literally just called up. TJ Hensick scored his first NHL goal. He was still at Michigan when drafted but had a pretty stellar collegiate career. I saw Marion Gaborik's first career hat trick. At one time I thought he might end up in the HOF but now...prolly not. Of course he's still pretty young.

Ryan Smyth was by far the best player on the ice. He wasn't the quickest but he gets around the net all he needs is a smidgen of separation and he can move the puck. All three of his points were no look behind the back. It looked like the first two were assts from behind the net but one actually deflected in off a King so he got credited w/the goal. His final was a thing of beauty. He got hit coming off the bench and lost his helmet. He looked like Craig MacTavish out there for a moment. Play goes into the King's zone. I know he's a superstar but still wondering if one of the king's would get his stick up just for the opp but it doesn't happen. He circles in front, there a mild scrum, puck bounces off toward the right corner, there's no defender coming in to pinch and right as I'm thinking he should try to shoot behind his back because there's a thin angle, he does! Just outside the goalie's leg and just inside the far post. Video game/trick pool shot.

The rafters seemed to be full but there were quite a few empty seats in the lower level. They didn't announce it as a sell out. That's not so good for a Saturday night. Most of the empties were prolly season seats. Colorado's not the elite team it was but there were a large number of fans. Which makes me wonder what the place is like when Minn or Dallas is rumbling through.

Nashville's a rumored move. Not even five months removed from winning the Cup, no one's mentioning the ducks. A lot of people blame Bettman but the overall health of the league has to be spread out from just one guy.

spartan26 said:
Nashville's a rumored move. Not even five months removed from winning the Cup, no one's mentioning the ducks. A lot of people blame Bettman but the overall health of the league has to be spread out from just one guy.
Click to expand...

I blame Bettman for a lot. While he can't do anything without the owners' approval, I think the decision to put games on Versus instead of taking less money to be on ESPN was a tragic mistake. ESPN did great production on hockey, and the league would have been immeasurably more visible. The NHL isn't in a position to be taking the money and running. The league has been battered, and the drop in popularity even compared to only six or seven years ago is staggering. They needed to build their popularity and visibility back up instead of grabbing for cash.
S

Now there's so much talk of expansion, KC, the northwest or Vegas, just because of the $115 Mil it'll shoot into the league. Talk about a quick fix, duct tape solution. More likely a swan song ponzai scheme.

Yeah, I remember thinking leaving ESPN was the stupidest thing they could've done. Especially at the time. I think even before the lockout their nightly production of NHL Tonight had been reduced to basically once or twice a week, whenever they broadcast games.

Then there was something I read that ESPN was saying "there's no economic model, [for how to set license fees for league that was already in decline and had missed considerable time in operation]." Basically the same argument studios are giving the writers for why they won't increase or recognize Internet usage. Some of the figures I read and points of contingency that were brought up made me think, 'well, given all that, I guess you do have to go w/another network. I think Spike TV was on the table at one time and there was someone else.

I think there was also a belief that more teams would have their own networks for broadcasting games. Apart from Fox Regional Networks or Barry Diller's group, ones like Altitude or NESN or YES, channels devoted to local franchises. While they have to hope that Dave in Indianapolis or Phil in Birmingham will turn into see what all the hoopla is about The Kid or Ovechkin, the first priority, (when crunched for resources), maybe should be Sam in Phily or Bill in Miami, places where existing teams can be supported. Not to suggest that owner greed didn't rear its ugly head, of course.

I think they need to put a team in Seattle. Screw Vegas.

I say this because I plan to move to Seattle in the next few years.

Going to Sharks/Canucks in an hour.

Scream down the boulevard

TheBeatGoesOn said:
Going to Sharks/Canucks in an hour.
Click to expand...

Which team will you be pulling for?

Earplugs? I'm a drummer, no need.

Oh man... Amazing experience. I had no clue I was going to end up in front row , $140 seats. :O My aunt and uncle have had season passes in the same 4 seats for the sharks since they came to San Jose like 16 years ago. I figured the seats would be decent at best, not the best seats. Sharks won over the Canucks - 5/3. 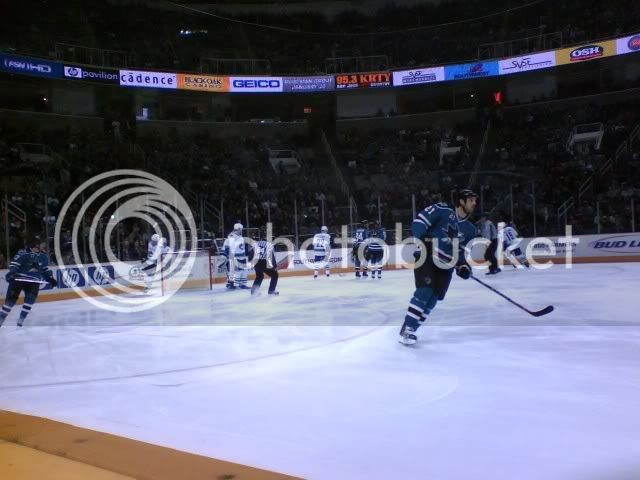 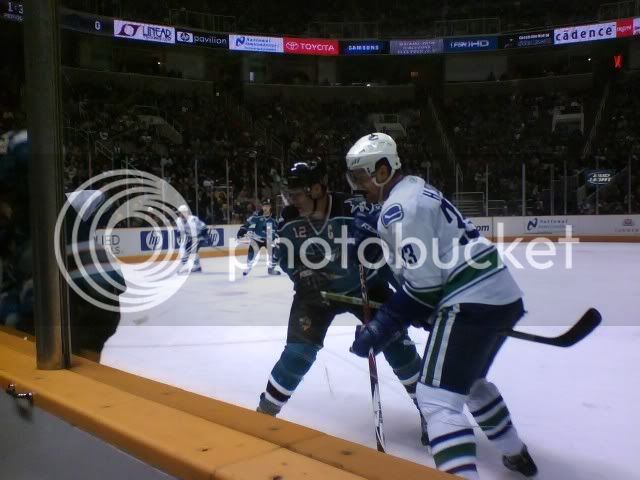 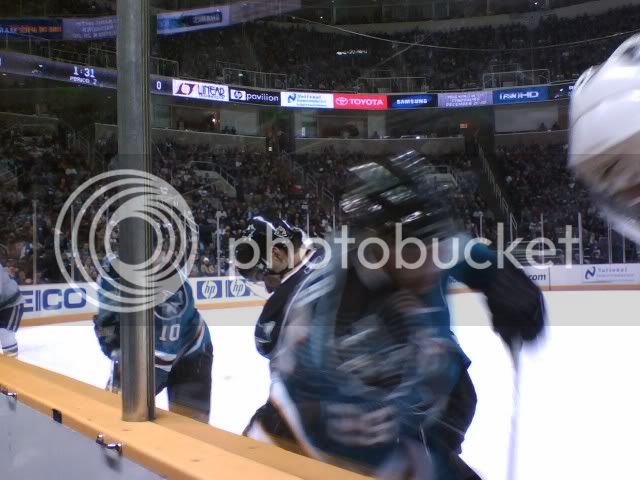 Yeah. Those are crappy cell phone pics. I REALLY wish I would have had a digi cam with me. Mine got lost a while back.

I didn't realize there was twins on the Canucks until I was at the game. It was crazy. The Sedins look totally identical. They were skating together between periods. Pretty awesome.

Will have digi cam (not cell phone cam) this time so I'll post up some pics later.

Scream down the boulevard

Those were some sweet seats fella! Glad you had such a good time. I can't wait to see your pictures.

LadyJaye said:
Those were some sweet seats fella! Glad you had such a good time. I can't wait to see your pictures.
Click to expand...

The seats were way sweet. I'm so glad and fortunate to have made it to two sharks games in those seats on my visit home. The game tonight was a lot of fun but we lost to the Ducks, 2-0. There was a couple of good fights. Gotta love rivalry teams.

Sorry for the huge/pixily pictures. Beats the camera phone though.

What about that 30 game suspension?

I saw the highlight that brought it on, nasty!

MacGuffin said:
What about that 30 game suspension?

I saw the highlight that brought it on, nasty!
Click to expand...

You talking about Chris Simon from the Islanders?