From Typology Wiki
Jump to navigation Jump to search

This study analyzed the relationship between Enneagram Type and MBTI Type using data from the TypologyCentral User Base and Personality Cafe User Base. The purpose was to understand several things:

Two sets of data were analyzed. The initial analysis was conducted using data from the Typology Central User Base which consisted of 22,877 members collected November 30, 2015. 4,703 of those members had entered in both their MBTI and Enneagram Type. The second data set of 21,105 members was from Personality Cafe, collected August 20, 2014. Raw data was utilized to capture the % of Enneagram types with each of the 16 types. Because the distribution of both Forums is disproportionately weighted towards Introverted Intuitives, the data was normalized using the published CPP MBTI percentages as a base - creating a set of numbers as it were, that would represent what the forum numbers would look like if they consisted of types aligned with the CPP distribution. Illustrative data for Typology Central and the normalized totals for each MBTI type are shown below. 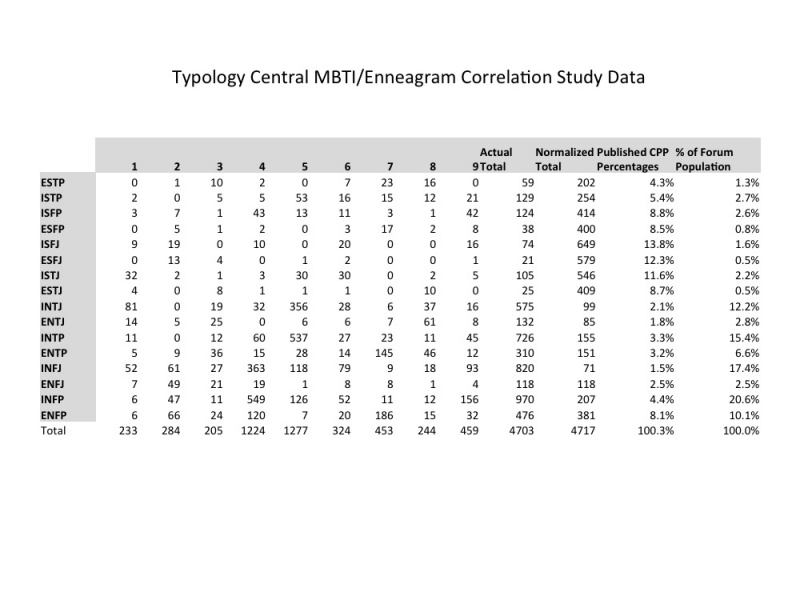 Frequency Of The Different Enneagram Types

Using normalized data across the two forums, it can be seen that the % of Enneagram types in the population was relatively consistent, with the exception of many more 8s vs 6s on Typology Central. Having at one point been mistyped as an 8 myself (I am a 6), I found this point to be particularly interesting, though it would be oversimplifying to attribute the difference in the two sets of data to that one potential mistype. The difference on this may be a combination of mistyping on one or both forums combined with herd behavior. One key point is that the Enneagram types are well represented across the population as a whole ranging from a low of about 6% to a high of 16%. This differs from the MBTI distribution which ranges from 1.5% INFJs to 13.8% ISFJs – making ISFJs nine times more common than INFJs. Enneagram doesn’t appear to have such wide variations in frequency across the various types. 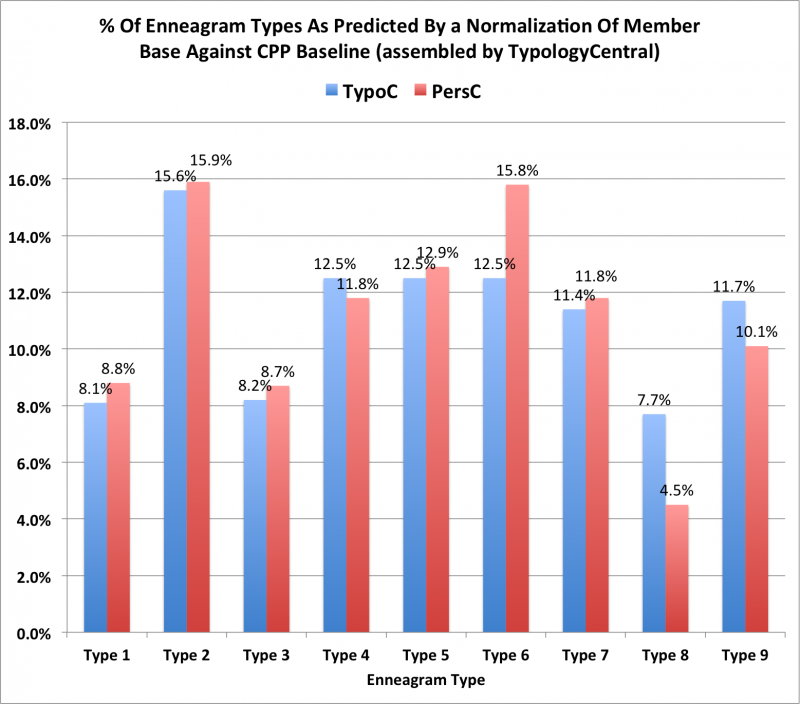 Percentages of MBTI Types Within Each Enneagram Type

What types do we most think of for each of the Enneagram Types? Our answer is probably the following:

Why do we think that? Here's why. Though any mapping MBTI to Enneagram type is potentially feasible, there are very significant correlations between MBTI Personality Type and Enneagram Type. The following graphic, which shows the Temperament makeup for each of the Enneagram types, clearly illustrates this. 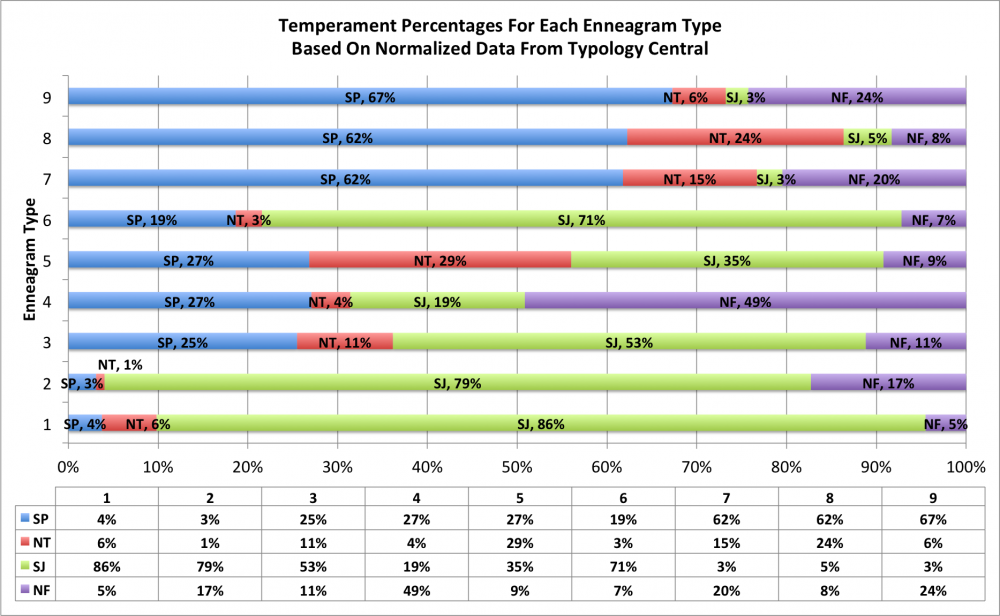 Several overall themes and patterns emerged from the data.

Preference For Sensing Vs. Intuition 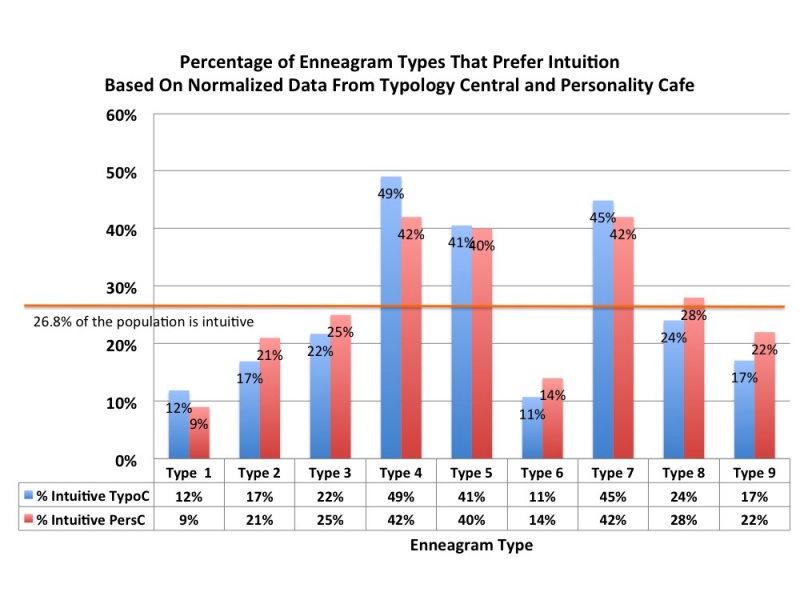 Preference For Extraversion Vs. Introversion 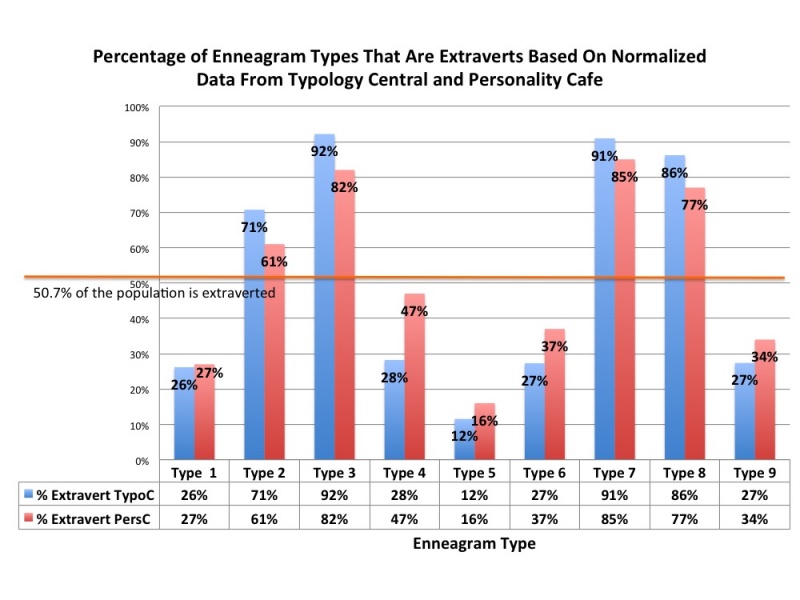 Preference For Feeling Vs. Thinking 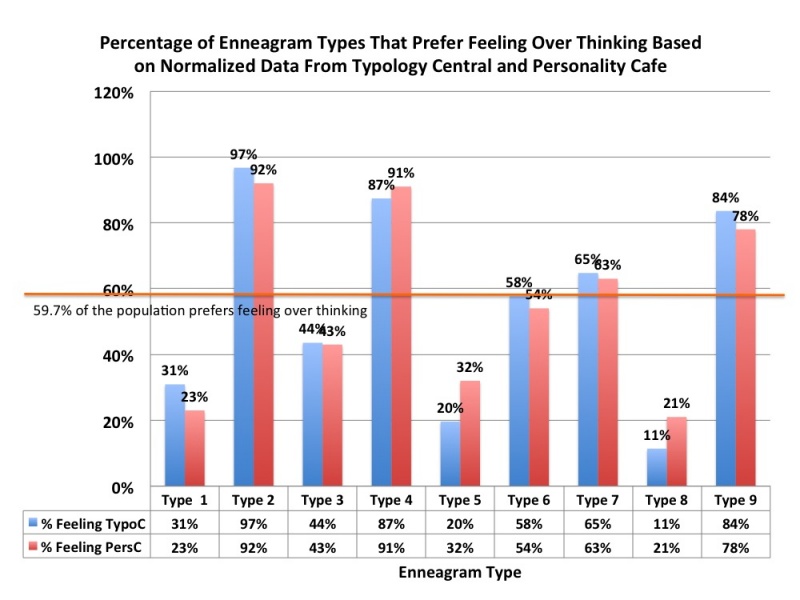 Preference For Perceiving Vs. Judging 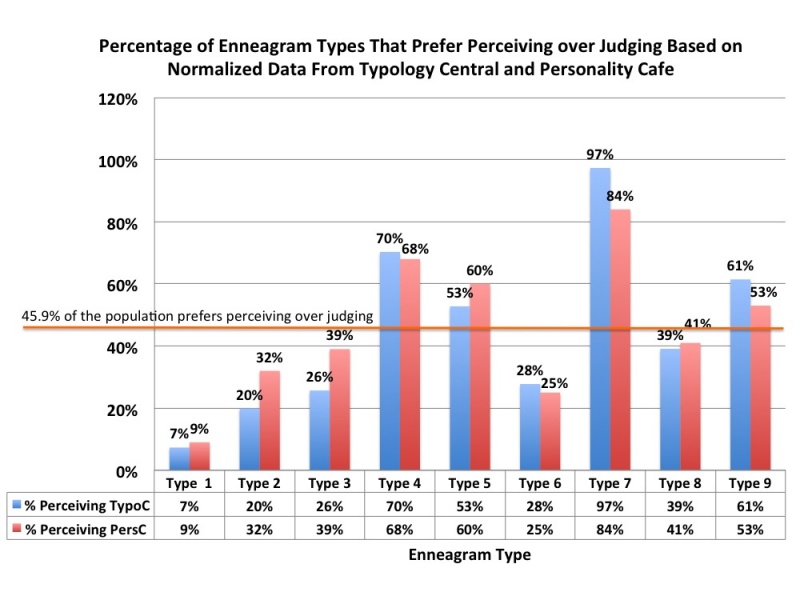 Percentages of Enneagram Types Within Each MBTI Type

The chart below illustrates the percentage of each of the Enneagram Types within each MBTI Type for Typology Central. Similar data was analyzed for Personality Cafe but is not shown here. 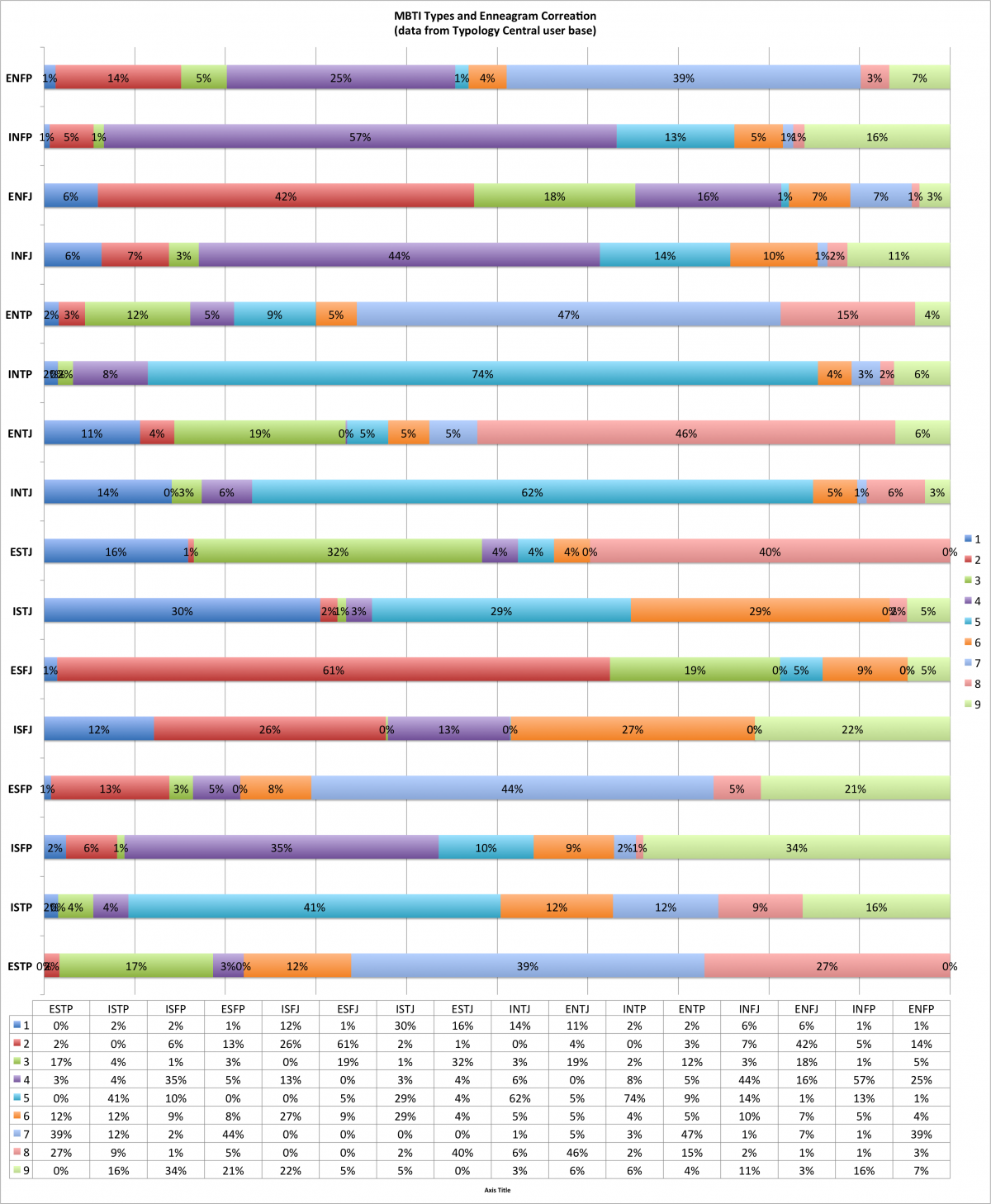 Percentages of Enneagram Type Within Each MBTI Typee

We just looked at a lot of data on each of the Enneagram types based on a normalized data from two personality type forums The following insights are derived from non-normalized information. For a particular MBTI type, which Enneagram type is mostly likely to be present? Any combination is possible but some are more likely. The observations below are based on analysis of both Typology Central and Personality Cafe. Note that graphics are for Typology Central only. 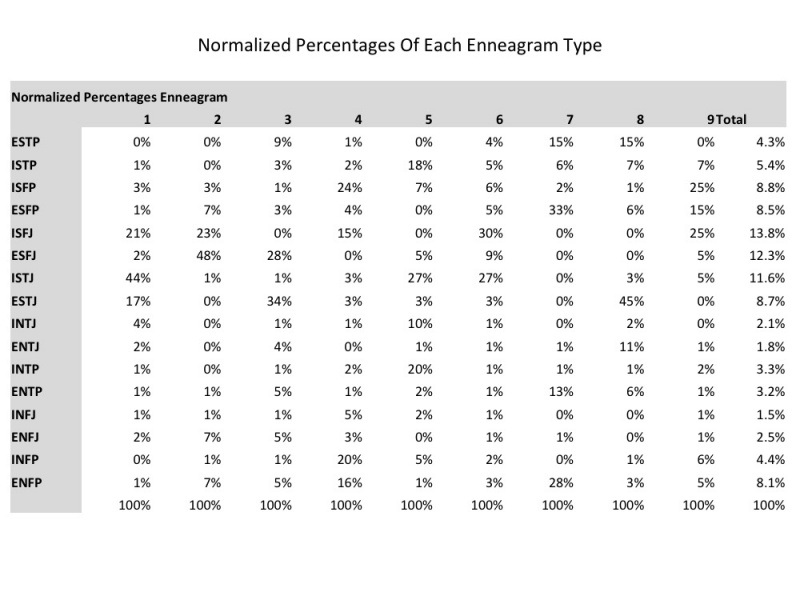 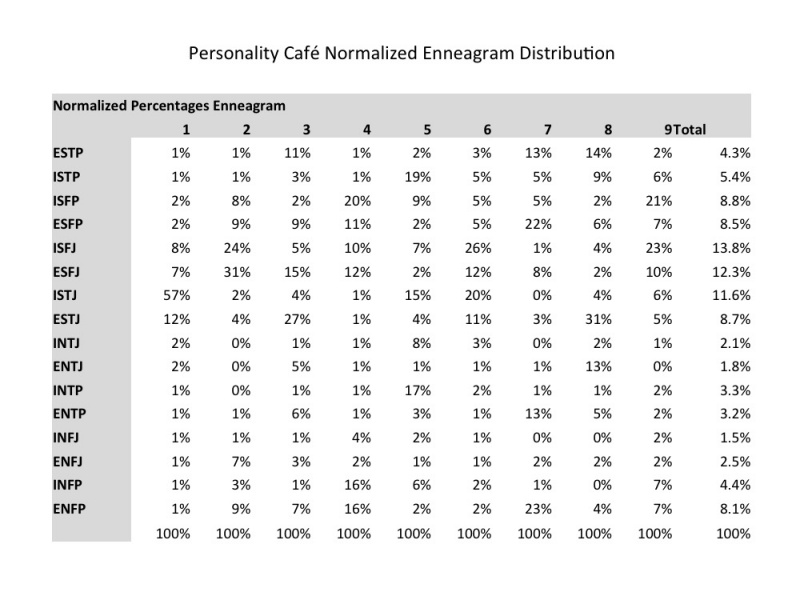 Another correlation: David Boje "Out of the Box"

Other correlations, such as Richards/Flautt/Baron are also similar.