Jung's Personality Types spends a significant amount of time describing each function attitude, but only makes a few, somewhat ambiguous statements about functions beyond the most preferred one for an individual. Jung generally referred to functions other than the dominant (primary) function as "inferior functions." Jung did make a reference to "auxiliary" function (p406):

Experience shows that the secondary function is always one whose nature is different from, thought not antagonistic to, the primary function. [...] Neither intuition nor sensation is antagonistic to thinking [...] but are functions of perception, affording welcome assistance to thought. [...] Hence the auxiliary function is possible and useful only in so far as it serves the dominant function, without making claim to the autonomy of its own principle.

What is not entirely clear, however, is the attitude (introverted or extraverted) of the tertiary cognitive function. Jung writes (p.340):

We call a mode of behavior extraverted only when the mechanism of extraversion predominates. In these cases the most differentiated function is always employed in an extraverted way, whereas the inferior functions are introverted; in other words, the superior function is the most conscious one and completely under the conscious control, whereas the less differentiated functions are in part unconscious and far less under the control of consciousness.

The Myer's Briggs Type Indicator (MBTI) is a written instrument for determining one's Jungian typological preference. The MBTI was developed by Katharine Cook Briggs and her daughter, Isabel Briggs Myers and was based on Jung's work. The two honed the MBTI and adjusted the Jungian definitions based on the data and analysis.

The MBTI represents type as a four letter type code, in which each letter of the type represents a dichotomy:

From the type code, the dominant and auxiliary cognitive function (function attitude) can be determined (see sidebar).

Most type dynamic models also describe type development models in which a type's most preferred functions develop first (where develop means a JCF is under conscious control and functions in an advanced and nuanced fashion), and then less preferred functions develop over time as the individual matures. Most models assumes that the least developed JCF develops last, with some models declaring that the least preferred JCF never develops consciously, so that it remains available to the unconscious.

Most type dynamic models share the common layout for the main four functions. They are:

The above can be displayed visually (using ESTJ and ISTJ as example) as:

For more information, see a complete set of function charts. 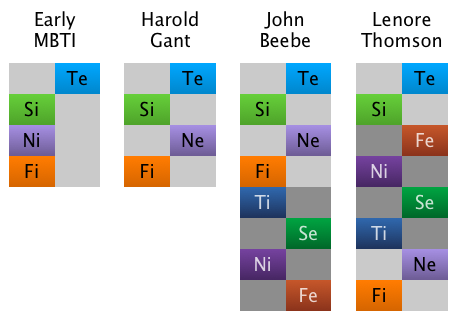 Functional Layout of Models using ESTJ as an Example

The eight function models posit that each individual has some access (conscious or unconscious) to all eight cognitive functions, and that there are standard orders of functions for each type.

The eight function models generally keep the relative order of the functions in Grant's model, but add the additional four functions.

John Beebe's posits that the four other functions are less conscious than the inferior function, so occupy positions 4 through 8. In Beebe's model, functions 4-8 occur in the same order as functions 1-4, but with the opposite attitude. Beebe also assigns to each function position an archetype.

For more information, see a complete chart of Beebe's type dynamics for each type.

Lenore Thomson proposed a lesser know model in her book Personality Type: An Owner's Manual. In Thomson's model, the other four functions are inserted between the auxiliary and tertiary function (see graphic above). Lenore Thomson assigns some specific roles to these additional functions:

In addition, Thomson assigns functions to quadrants of the brain: