What would be the ideal education today?

My sister went to a montessori school growing up. She now sends her daughter to one as well.

When the time comes, if possible, I'd probably want to do the same. 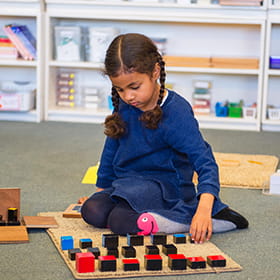 Montessori Early Childhood programs support children ages 2.5–6 in becoming independent, responsible students who love to learn. In their third year—often known as Kindergarten—children get their turn and take pride in being the oldest.
amshq.org

This is also very interesting for slightly older:

This seems like a great outside of school activity:

http://kiwico.com
I loved my high school experience, finding something similar to that by then would be something I'd look for. A public high quality high school is great for getting people socialized in a positive way IMO.

If affordable, I'd make sure by the time the kids are old enough for middle school/high school we'd get access to a maker space of some sort.

The main features I would seek in education are:
1) Encouragement of self-reliance and self-direction
2) Merging practicality and creativity in activities
3) Still meeting minimums for conceptual expectations for children at various stages (not strict, but approximate)

If they try to teach intuitive children by SJ teachers, they'll fuck the kid up.

During the first 2 years in an Early Childhood classroom, Montessori students look forward to their turn to be a leader. In their third year—often known as Kindergarten—children get their turn and take pride in being the oldest. They serve as role models for younger students; they demonstrate leadership and citizenship skills. They reinforce and consolidate their own learning by teaching concepts they have already mastered to their peers. In their Kindergarten year, they express confidence, develop self-esteem and self-sufficiency, and show responsibility.
Click to expand...

I wouldn't want to do this^ as a kid for instance.

Ask them if they have any special programs and teachers for intuitive kids, or to prevent intuitive kids from being bullied by sensor kids.

I suspect 1/3 of the kids would have intuitive tendencies, therefore schools should start separating the classrooms for intuitive kids and sensor kids and applying different curricula tailored to them, like wizarding schools in Harry Potter.
T

First, I would like to see higher education become integrated to professional environment, like businesses, government since many of their student are looking for job after graduation but it is uncertain that what they have learnt from university will help them land a job. Their role is to advise so that what is learnt at school will be appreciated by professional environment after graduation. If business value practical skills since they think it is the practice that gets the job done, not theoretical explanation, then related practical skills should be taught at school.

The second, The university should reconsider assigning social science research project, that use questionnaire as a means of data collection to each student as an individual. If they keep on doing so, during research, Student will be having problem that they won't be able to solve: unconfirmed respondents or even faking the respondents, which is dishonest.

I have learnt from research company that they are able to tackle this problem by making partnership agreement with individual interviewer and hiring supervisors that makes sure the respondents reported by interviewer are indeed respondents in actuality.
This business partner and professional works with different aims. The first is to get respondents on the field as many as they can trying to meet target sample, and the supervisor who serve by confirming the respondents reported one by one. The later checks the first 's task. If the latter finds a fake respondent, the questionnaire reported will be rejected and the interviewer won't get paid and further might get themselves blacklisted.

Student usually don't make this partnership agreement and don't hire people since they can't afford to pay both like research company. Can you imagine what will happen when the field data collector who distributes questionnaire is the same as the verifier? There will be no check and balances. For the interviewer , fake respondents are not finding, it is something that they already know at the very beginning of the survey. In order to make it a finding, there has to be another worker who don't distribute questionnaire checking it one by one, call the reported respondent's phone number asking question whether they did participate in the survey. Many students carry out the data collection on their own and They are very likely to get frustrated since survey participation could be low, not met the targeted sample, hence they could end up by filling out the questionnaire themselves.
As a result they are unlikely achieve the data collection result : real respondents as the company do.
Last edited: Aug 2, 2022
U

I think that it would depend greatly on the temperment and learning style of the person attending and that one size fits all can never be perfect.
P

Speaking from personal experience, there should be more accelerated education for gifted students.

I would have liked to enter university at 16 instead of 18.

[Type 1] The sad side of Type 1 and why most of 1s are probably mistyped as some other type.

T
Type me in any system!

May 4, 2022
Pionart
P
S
How to be Successful as a Person, in School or Business, Social Relationships, also as Parent, and more

A Typing Thread From The Ever-Indecisive One