Learn your primary apology language to better understand how to heal hurt in your relationships. 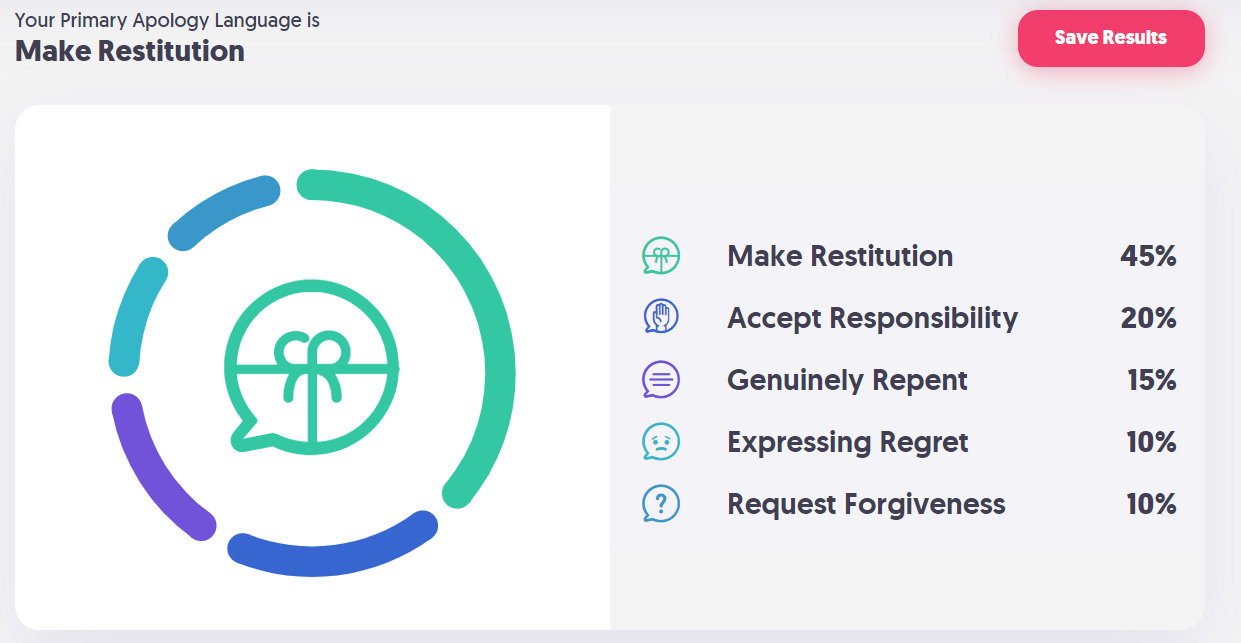 In our society, many people believe that wrong acts demand justice. The one who commits the crime should pay for their wrongdoing. A mate who speaks this love language feels the same way towards apologies. They believe that in order to be sincere, the person who is apologizing should justify their actions. The mate who’s been hurt simply wants to hear that their mate still loves them.

There are many effective ways to demonstrate sincerity in an apology. Each mate must learn the other’s love language in order to complete the act of restitution. Though some mates may feel as though all is forgotten with a bouquet of flowers, that may not necessarily work for all mates. Every mate should uncover what their partner’s main love language is (Words of Affirmation, Quality Time, Acts of Service, Physical Touch, and Receiving Gifts) and use that specific language in order to make restitutions in the most effective way.

For a mate whose primary apology language is making restitutions, no matter how often you say “I’m sorry”, or “I was wrong”, your mate will never find the apology sincere. You must show strong efforts for making amends. A genuine apology will be accompanied by the assurance that you still love your mate and have a desire to right the wrong-doings committed.

Hmm...I don't want people to "pay" for their actions, I do however want an indication that they won't do or try not to do the same thing in the
future. The most important thing to me is that the apology is sincere but I found most of the available answers sounded really insincere,
probably due to the way they were worded, they sounded like things someone would say not to suffer consequences/get out of the current
situation and there was nothing that would indicate they won't repeat the behavior, the ones I choose at least were about them taking some type of action to show they genuinely cared, that might just be my impression/interpretation though. 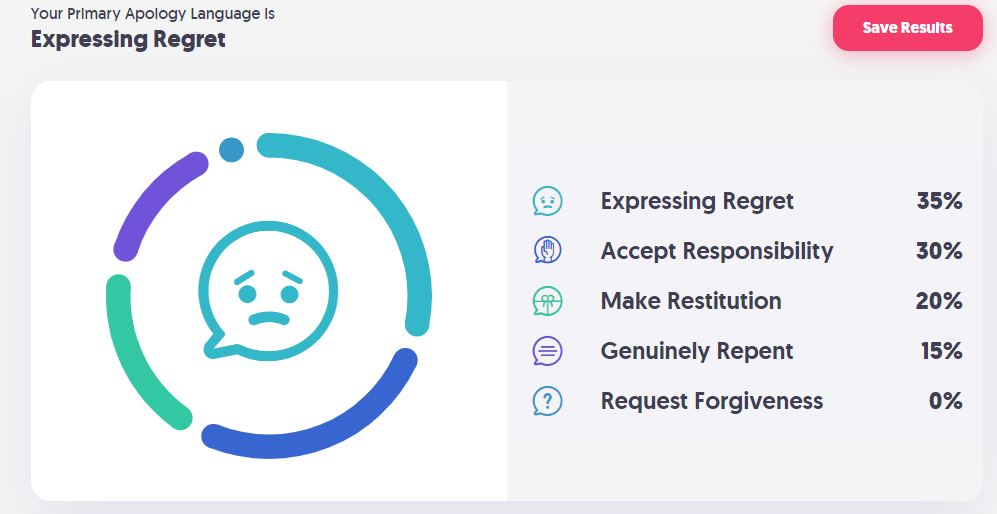 The “Expressing Regret” Apology Language speaks most clearly when the person offering the apology reflects sincerity not only verbally, but also through body language. Unflinching eye contact and a gentle, but firm touch are two ways that body language can underscore sincerity.

It is very difficult for some people to admit that they’re wrong. It makes them doubt their self-worth, and no one likes to be portrayed as a failure. However, as adults, we must all admit that we make and will make mistakes. We are going to make poor decisions that hurt our mates, and we are going to have to admit that we were wrong. We have to accept responsibility for our own failures. For many individuals, all they want is to hear the words, “I am wrong.” If the apology neglects accepting responsibility for their actions, many partners will not feel as though the apology was meaningful and sincere. Many partners need to learn how to overcome their ego, the desire to not be viewed as a failure, and simply admit that their actions were wrong. For a mate who speaks this apology language, if an apology does not admit fault, it is not worth hearing. Being sincere in your apology means allowing yourself to be weak, and admitting that you make mistakes. Though this may be hard to do for some people, it makes a world of a difference to your partner who speaks this language. For some individuals, repentance is the convincing factor in an apology. Some mates will doubt the sincerity of an apology if it is not accompanied by their partner’s desire to modify their behavior to avoid the situation in the future. Admitting you are wrong creates vulnerability. It allows your mate to get a glimpse of your heart. The glimpse of true self is assurance that the apology was sincere.

It is also important to make a dedicated plan for change. Often apologies involving repentance fail because the person never set up steps of action to help ensure success. Taking baby steps towards repentance instead of insisting on changing all at once will increase your chances of successfully changing your ways.

It is important to remember that change is hard. Constructive change does not mean we will immediately be successful. There will be highs and lows on the road to change. You must remember that anyone can change their ways if they are truly and genuinely ready to repent.

I find it hard to respond to some of these when the mistakes in question are trivial. I think accept responsibility should probably be a bit higher tbh.

I did not like this test, purely because I go about apologies in a much different way than any of these options came close to on every question.

тень said:
I did not like this test, purely because I go about apologies in a much different way than any of these options came close to on every question. View attachment 25258
Click to expand...

Same, sometimes I had to sit there thinking of which is the closest but they were all too far off. It got annoying after a while. Or I just wouldn't forgive them in some of these cases, honestly.

silverknightgothic said:
Same, sometimes I had to sit there thinking of which is the closest but they were all too far off. It got annoying after a while. Or I just wouldn't forgive them in some of these cases, honestly.
Click to expand...

I am quite the opposite, I forgive very easily and don't keep "Track" of the scorecard. What I do, is want to see them self-reflect and work on themselves. Apologies are meaningless unless the person actually desires to change. 90% of the options just felt like ass kissing.

тень said:
I am quite the opposite, I forgive very easily and don't keep "Track" of the scorecard. What I do, is want to see them self-reflect and work on themselves. Apologies are meaningless unless the person actually desires to change. 90% of the options just felt like ass kissing.
Click to expand...

I think that's why we both scored higher on "restitution." I felt the same way about the ass kissing. The restitution options were the closest to making a change (though most were unsatisfying to me as well).
You must log in or register to reply here.

Marriage as a “Hotbed of Individuation”

insight into my enneagram type?

Shrines by the Wayside