[Other/Multiple Temperaments] Small rant on the trend of mistyping

Amberiat said:
Time for a truth bomb people will either secretly or openly hate me for:

So basically we have 73.5% sensors and only 26.5% intuitives. Now we know all about that N bias around MBTI communities, extremely likely coming from mistyped sensors who have deeply seated self-hatred issues and want to feel special (because you know, muh rarity percentages).

So looking at MBTI communities EVERYWHERE people type as intuitives left and right distorting the real traits of these types because most of them are in fact, mistyped.

So take a step back, get out of your imaginary world and accept reality, you're most likely a mistyped sensor. <- This comment is not directed at anyone in particular, it's directed towards the community at large which needs to take a second look at themselves and accept reality as it is. Learn the functions and their dynamics properly and don't type yourself based on stupid tests or vague, idealized/biased descriptions of types or whatever.

Sooo yeah, this is mostly a rant, but in the end it's all true (and it doesn't take a genius to figure it out, just look around) I felt like this had to be said, and it probably won't mean much, if anything at all but who knows, maybe someone out there appreciates the truth being spoken out loud and even though rather unlikely, maybe someone is gonna wake up from their fantasy after reading this and who knows, maybe it'll end up helping them somehow.
Click to expand...

This thread is from 2018 yet I hope to see you on the forum some day.

I propose that the actual distribution of types might be closer to a Normal Distribution as follows, and the percentage distributions for each type given on different sites should be taken with a grain of salt as they rely on subjective testing with high levels of inaccuracy involved.

Given that everyone has access to internet these days more or less, I would expect a similar distribution of personality types on online venues. 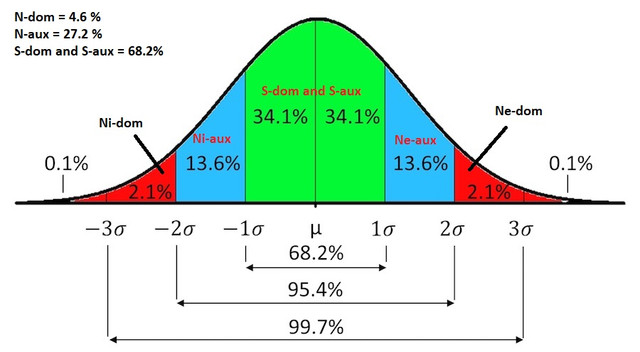 It's tough. I mean, I agree with 90% of people's MBTI types here, but it's not because they scream N, it's because I see heavy Ne and Ni and lower Se and Si. I feel like Ns are more likely to be drawn to MBTI in general due to it being grounded in theory, and a lot of S types do seem to find it hogwash but a rare S type shows here up too and any type can enjoy personality type. And besides, I had a friend in college and I'm certain he's an NF type and I tried introducing him to typology and he just sent me that Adam Ruins Everything clip about how MBTI is pseudoscience. I'm pretty sure Adam Conover is an ENTP as well. I feel like intuitives would stick around this forum more as it gives them time to play with the theory and tweak it, but then again I don't think theory automatically equals N either. I can especially see Ti types, like ISTP and ISFJs with their hidden agenda Ti, enjoying the theory. I definitely find it easier to find S types in my real life, and harder to find N types. So it makes sense they're all flocking to places like this one. People say N types are special, and it's cool being an N, but it doesn't make you special. If special means "deep", I've found many sensors coming off deeper than intuitives-ISTJ is one of those types despite it being in the 40%. Dominant Si+tertiary Fi be like that. I think personality tests, like IQ test, are appealing to the human psyche no matter what MBTI you are. Though, I do wonder, how did they get that data? Are they measuring dichotomies or functions there? Who did they poll? Was it a self reported typing, or were they screened? They also say that certain MBTI types are more common in certain countries, and that certain functions are more valued in other countries. I've seen data that says Ni doms are more common in Japan, but I don't know enough to say if that's bullocks or not. I do see how Ni dominance would fit into Japanese culture, though. But yeah, I think most people on this particular forum aren't mistyped, but I think it is pretty easy to mistype as an N in general, given how glamourized Ns(and especially Ni) are and that many people just dip their toes into typology by taking the 16personalities test and then putting that type in that bio. Apparently in socionics, sensors are just as respected as intuitives. Wonder if Russia has more accurately typed citizens, but they are basically the typology hub of the world.

It doesn't help that a lot of type descriptions are pretty terrible. Please Understand Me is fucking laughable, it's no wonder your average person who gets into the theory via Kiersey/authors influenced by Kiersey would want to type as an N. I couldn't figure out that I was a sensing type for a long time because of this. So many sensing descriptions describe mostly behaviors, while intuitive descriptions describe mostly motivations. Inherently two different things. It became far easier to type myself and others when I made this distinction.

Ultimately a lot of personality profiles online really fall short of being able to fully describe a person. So it's no wonder that people won't relate to a lot of sensing descriptions, if it's describing mostly actions.

Aside from this, I also find that lots of younger people online have an ego about being intuitive. Like they are so desperate for affirmation of being different, and they totally eat up the idea of being a primarily intuitive person. And maybe some people never grew out of this, and this bias continues even later in life when they have more experience.

My take is the stereotypes and generalisation assigned into the different types.

Most online descriptions base the Personality descriptions entirely by behavioural traits, rather than how the brain of the person functions. I also think It's because of the hand that some types are dealt, some types are destinied to be less succesfull and less 'powerfull' than the other types, because of how they function, according to their function stack.

The sad reality is, ENTJ, due to their Te, are focused on the objective and external logic, they would assert their thinking on others, namely facts and logic, and would always be the good candidate to lead, which is expected of a man, good luck for an IxFP man to do any of those, due to their primary focus on Fi.

The main flaw, in my opinion with the personality theory is, It's limiting and it tries to dictate how you behave, rather than explain your motives to you, many just try to dissasociate themselves from the type they are because of the given stereotypes and generalisations imposed on them, ofcouse they would rather mistype themselves, and you know, I can fucking understand them, the MBTI theory is pretty flawed in my opinion.
You must log in or register to reply here.

[MBTI General] Where Are We Headed/A Sad State of Affairs

H
Please help me type this significant other....