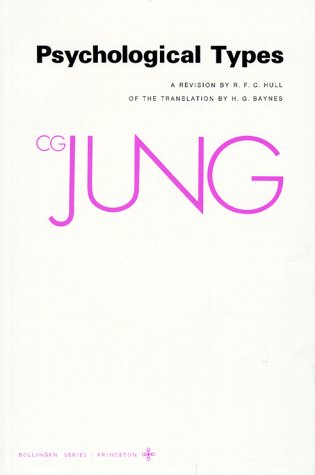 Psychological Types is the original book from the inventor of the system upon which all the other stuff is based. I read this on a balcony in Cancun, overlooking a rather large pool and the Atlantic Ocean, which was what I enjoyed most about the experience. Jung provides some historical perspectives on type, explaining different systems that have been used in the past or at least perspectives from various leading theorists. The core material is in chapter 10 (Roman Numeral X) which is a general description of the types. With chapters like "The Type Problem in Poetry", "The Type Problem In Modern Philosophy" and "The Type Problem In Biography", I found this book to be quite tedious to get through. It's highly theoretical nature and Jung's preponderous and meandering writing style were painful for me to tolerate. I forced myself to read it all because people speak so highly about the book. Yeah I know it's a classic and a lot of people revere the guy but I really didn't enjoy reading this.

I give it two stars.

Best book on typology that everyone should attempt to read(and understand, that means reading it many times over the years), but its quite a heavy read and most people will never understand what Jung means with many of the stuff in it, no matter how many times they read it. I think S and Te types will most likely have the most problems reading the book, since its full of TiNe with some(pretty poor ) attempts of making it somewhat believable for Te folks/academia.

10/10 for me, but for someone who doesent tolerate theory, is a bit soft in the head, havent studied psychology, doesent want to process the information that they read or doesent want to connect over 9000 dots to get the big picture, i cant recommend the book for. The book is not made for a layman or for the regular internet age typology hobbyist, so it shouldnt be rated based on whether some people with no background on analytical psychology can understand it or not. The deal is that the subject that the book covers(typology) is so complex that writing about it(in some other way than using some stereotypes) requires complex ideas to be explained, and trying to simplify it too much will just result in poor understanding of the subject for the reader.
G

I read this after I found that so many online type theorists differ in how they define functions and type. I wanted to get to the root of the matter, both historically and etymologically. That said, it was painful to read, but not the most grueling of his works IMO. While most of his books exemplify the mindset of a pedantic, prejudiced old codger, they also reveal a level of general gloom about human nature not so easily stomached. For some this would be poison, for others an antidote. I'll admit that it brought me closer where other sources repeatedly failed me, but not necessarily because I agreed with Jung's perspectives.

The authority Jung exercises while attempting to type historical figures and the reasoning he uses left me contemplating about various typings I previously took for granted. A reminder of how feeble and inconsistent the typing process can be, even if you're Jung himself.

It's a good time if your curiosity proceeds you, or if you're doing enough recreational drugs.

This book was a fucking snoozefest. No, seriously, each time I tried to read it I literally fell asleep.
G

senza tema said:
This book was a fucking snoozefest. No, seriously, each time I tried to read it I literally fell asleep.
Click to expand...

I think that's why a lot of people think Jung was a 9, because his books amble along, like an old man on an afternoon stroll. If only Freud could have written Jung's ideas for him. I know they were estranged by that point, I'm just playing the TypoC equivalent to that game that tweenaged girls like to play: Imagine X's face on that Y's body.

A bit of a tedious read and some of it I disagree with like where he says extraverted feeling is found exclusively in women. If you can get through it I think it is a good foundation to have but if you can't there are other books where the functions are explained in a more understandable manner.
T

I skipped the earlier chapters to go directly to read chapter 10: General Description of the Types. Although I found the book hard to read, i recommend reading it for a serious student of typology, For someone who wants to understand 8 basic psychological function. Some says the book is suitable only for specialist in psychology/psychiatry. However, I would rather read math book than this book.

I'll get around to this eventually. So far I've just some of the sections describing each type. Well, read the sections multiple times. I'm a big fan of some of the ways the types were originally defined.... but no kidding even just those parts were a challenge to make sense of.

lunalum said:
I'll get around to this eventually. So far I've just some of the sections describing each type. Well, read the sections multiple times. I'm a big fan of some of the ways the types were originally defined.... but no kidding even just those parts were a challenge to make sense of.
Click to expand...

Yeah his wording is quite obscure.

That's one reason why I get annoyed when people go on about how "we have to stick to Jung's original definitions!". I mean, what even were his definitions? I know he does have a section in the book giving just brief definitions, but the elaborations, while probably rather insightful, are just hard to tie in with concrete experience.

Nowadays we have definitions and explanations that are anchorable in every day thought and experience, so it would seem foolish to stick only to Jung and ignore everything that came afterwards, even if a lot of the further developments were wrong or shaky. Jung pioneered it, but we've come a long way since then.
I

Not even going to bother.

It has a strange structure.

It's like two books, the first book doesn't quite develop the theory explicitly but inside interpretations of religious, literary, philosophical and historical texts, and presents the theory as he probably developed it and his sources, and the second book develops the theory without any references, more like an outline.

Where is [MENTION=3325]Mole[/MENTION] and his four star rating?

I voted but I forgot which option I vote.

I had finished reading almost totally a few weeks ago. I skipped some boring paragraphs analyzing myths and all that stuff... And I had read chapter X like 3 times.

I didn't vote 5 stars as I remember. I like Jung theory, but I don't like how he writes. I am with those who thinks he is a Ni-dom, because in several parts of the book it is as if he is speaking an ancient language. I am a 100% sure that text would look obscure even on my own native language. But after I had cracked it, things went way more clear. A lot of things that look subjective and "prior to interpretation" are not that subjective, but the writing is really hard to understand and figure. Jung looks quite vague at the beginning, while he is actually making an effort to NOT be vague, while some people after him are vague on purpose... I also don't like the order of the chapters. For anyone starting the reading, I would recommend chapter XI of definitions first, chapter X and than the other chapters. Start reading it from the beginning just makes it more confusing since he starts to talk about stuff before giving clear definitions, to only proper define the types in the end of the book: I think he should introduce the definitions first (chapter XI), the types after that (chapter X) and only then the other parts (liking or not they are bonus, even though it is on these parts where E/I gets deep; Jung E/I is quite deep). Also, some versions have extra additions of articles at the end, and, actually, the articles are worth reading first because some of them works as a good general introduction, that is more straight to the point and more clear.

The obscurity of Jung's writing is partially the reason why people carry many different post-Jung interactions and definitions that starts not to evolve, but to derail it, specially when people ignore any data or evidence so whatever they say will be a truth. A lot of post-Jung stuff went against Jung partially because of a lack of understanding.

Verona said:
A bit of a tedious read and some of it I disagree with like where he says extraverted feeling is found exclusively in women. If you can get through it I think it is a good foundation to have but if you can't there are other books where the functions are explained in a more understandable manner.
Click to expand...

It's basically tainted by his sexist ideology and also shows that he couldn't type people.

A Tympanum in a Time of COVID

Marriage as a “Hotbed of Individuation”

A Tympanum in a Time of COVID