iauiugu said:
2hhEQ&index=5&list=PL6rzdODmcL67LR87rQxq8LbKxsecttto5"] this video[/URL] between the Ne-Si cognitive function axis (you: seeking the truth behind the multiple perspectives) an the Ni-Se axis (me: seeking the bottom line of the raw data).
Click to expand...

Cults are defined by their jargon, and the jargon above defines the cult of mbti.
I

Mole said:
This is a worldview of print. It is linear and sequential, logical and teleological. Whereas as the worldview of the electronic media (emedia) is entirely different.
Click to expand...

Not sure how what I wrote suggests those first three words, but what is the worldview of emedia, and why is it necessarily better than a teleological perspective?

iauiugu said:
Not sure how what I wrote suggests those first three words, but what is the worldview of emedia, and why is it necessarily better than a teleological perspective?
Click to expand...

And an interesting corollary is that any new environment is invisible, so we focus on the old environment as content.

Also any new environment numbs us so it can go about changing the sense ratios of our psyche.
I

And an interesting corollary is that any new environment is invisible, so we focus on the old environment as content.

Also any new environment numbs us so it can go about changing the sense ratios of our psyche.
Click to expand...

I agree with the principle of environments you're positing, but not sure why the environment numbs us; i see it as either too subtle or difficult to articulate, which is de facto invisibility.

And I agree with emedia's examplehood if my idea of 'print' meaning 'analog arts' is close to what you mean by it.

So what you were saying before about the... obsolescence of teleology? that the new media promotes and reifies a custom of connecting to the cacaphony of culture and humanity as their higher network over particular visions? particular visions with followers are cults? 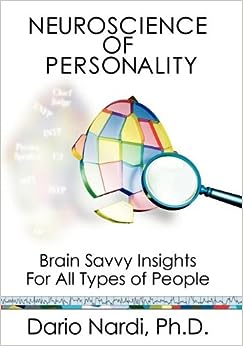 This book is about the results of Dario Nardi's investigation into personality type and and how it relates to activity in the brain. He proposes that people use their brain in fundamentally different ways and that particular types tend to demonstrate stronger activity in certain areas of the brain than others. The concepts are fascinating as is the book. The following is a presentation that he gave at Google on the topic which lays out some of his ideas.


What I really liked was that this represented some pretty fresh thinking and he does a nice job of explaining things. If cognitive functions do really exist than it would seem logical that our brains are wired in certain consistent ways. One of the more interesting things I recall him saying (and I'm not even sure it's in the book) is that certain types as they age, start to look like other types. The INTJ, that prefers Ni>Te>Fi>Se is compared to the ISFP that prefers Fi>Se>Ni>Te. Those two types share the top 4 cognitive functions and as a result, brain activity converges as they grow older. I believe the idea may be that existence of the same function pairs (such as Ni/Se) and the corresponding maturation of their usage as someone gets older, causes those two types to look more similar.

The biggest problem I have with the book is the number of participants in the study, which if I understand it correctly, is 56 individuals. I am no expert on statistics and I guess many medical studies involve small populations like this and present conclusions based on those numbers. Even if what is in the book is true, I don't understand why he didn't involve more students. It just seems like an extremely small population from which to derive conclusions from. That is the only reason I give this 4 stars instead of 5.
Click to expand...

Honestly, anyone that says "fundamentally different" referring to "types" makes me think they are smoking the peace pipe too much.

Saying that someone's brain activity correlates to the operating mode a person is currently in is one thing, but some of Nardi's stuff and people considering it treat "type" as basically biological or unchangeable, and that just seems ridiculous to me.

Here's a link showing the most active brain regions by type, taken from Nardi's work

Personally, I'm not ure how anyone can assert the equality or value of all the types after seeing this, after seeing in black and white how some types are little more than animals neurologically while others default to recently-evolved, higher brain functions the rest of us have to struggle to use.

Personally, I'm not ure how anyone can assert the equality or value of all the types after seeing this, after seeing in black and white how some types are little more than animals neurologically while others default to recently-evolved, higher brain functions the rest of us have to struggle to use.
Click to expand...

Yeepers. I hope you're joking.

Nobody should be "asserting" anything significant about "the equality or value of all the types" â€” or anything else â€” based on Nardi's EEG work.

Even Nardi himself doesn't claim that the study discussed in Neuroscience of Personality was anything more than a tentative, exploratory one. It involved 60 people and didn't come close to providing sufficient data to respectably validate any of the functions. And it's also been criticized on the grounds that EEGs are too crude a tool for this kind of stuff. Here's most of Wikipedia's list of "disadvantages" of EEG-based research:

If there's been a single review of Neuroscience of Personality in any reasonably well-known psychology periodical, I haven't been able to find it.

And on top of all that, the type model Nardi subscribes to is the forum-famous Harold Grant function stack, and that's a model that's inconsistent with Jung, inconsistent with Myers, has never been endorsed by the official MBTI folks, and maybe most importantly (and unlike the respectable districts of the MBTI), has no substantial body of evidence behind it â€” and indeed, should probably be considered all but disproven at this point.

As discussed in those posts, the correlational patterns corresponding to the "tandems" of the Grant function stack â€” e.g., with the "Ti/Fe types" on one side of the spectrum and the "Te/Fi types" on the other â€” virtually never show up in the real world, no matter what aspect of personality or behavior anybody's correlating with the types.

Ten or twenty years from now, if Nardi manages to get anybody respectable to take his EEG stuff seriously and perform large-scale studies that seek to replicate any of his exploratory "results," is it going to turn out that those elusive HaroldGrantian patterns that have failed to show up in 50 years of MBTI studies are for real?

Hey, anything's possible, I suppose. But I think it's unlikely.

I heard Nardi the other day on some radio/podcast and he has increased his work to now include 150 people, I believe, with an emphasis on ages 25-80. He said the results were not very different from the initial study (I don't think he has published yet) and then went on to discuss how 150 people in a brain-imaging study actually is a large amount, and how sensitive and effective the tool he is using is (I'm not sure if that is the exact same as his initial study.)

Any how, just thought I through it out there.
You must log in or register to reply here.

It’s Extroversion & Introversion All the Way Down